Shepherd's Grain, one of my favorite flour producers, has a new flour geared towards pizza makers: Napoletana “00” Pizza Flour. I've been using it for a couple of weeks now, and it's pretty amazing.

Here's the TLDR on this flour for the impatient: If you're using Caputo Pizzeria 00 or any other 00 flour, you really should try Shepherd's Grain Napoletana 00. It's local to the Pacific North West, which means (for me at least) it's fresher which makes for better tasting pizzas. It browns way better in a home oven than other 00 flours, and you can use it for bread making as well! And if that's not enough, it's also much more affordable than Caputo or shipping another 00 flour from across the country.

Now read on for story time, the longer review, and eventually more pictures. 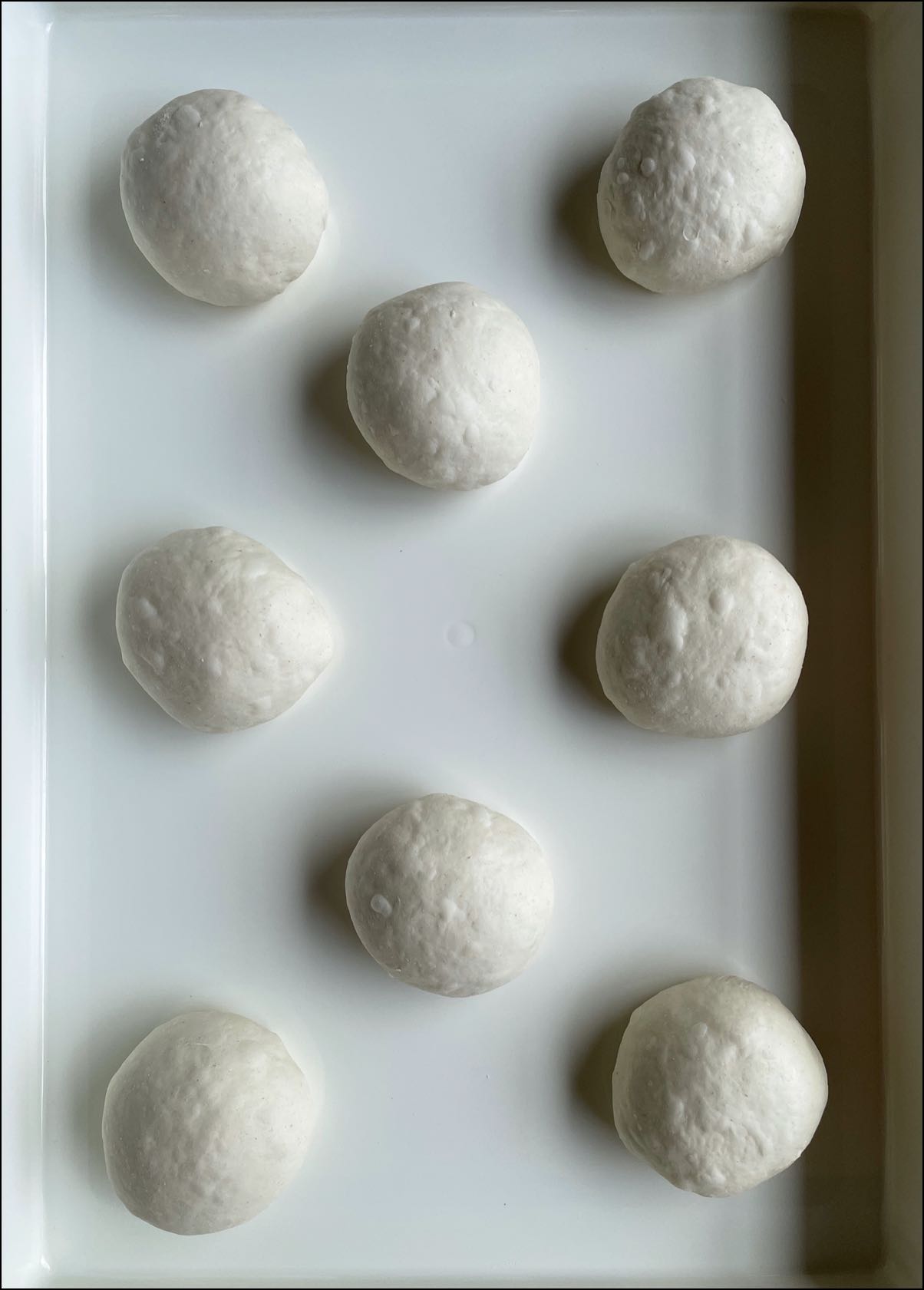 I've been using Shepherd's Grain high gluten flour for at least 5 years, possibly longer. I came across it in a local restaurant supply store and picked up a 50lb bag for a little over $20. It was cheap, so why not? And I needed some high gluten flour for New York style pizzas which I was making in my home oven.

My main flours for Neapolitan style pizzas in my wood fired oven at the time were either Caputo 00 Pizzeria (which I could pick up down in Seattle for $45 for 50lbs) or Central Milling's Reinforced 00, which I could have shipped to me.

If you look online you’ll find a lot of people consider Caputo Pizzeria the king of 00 pizza flours. It certainly has the mind share when people refer to "00" flour at any rate. But my experience with Caputo was a bit spotty. It was sometimes good, but I'd occasionally get a bag that was just… off. It wouldn't raise, or no matter how much I kneaded the dough it was always sticky. I assume the bags just went bad. Who knows how long it took to be shipped over to the US? And how long was it sitting in storage before I bought it? And now what am I supposed to do with 50lbs of unusable flour?

I also bought a number of bags of Central Milling's Reinforced 00, which was way more consistent than Caputo at least. But shipping large bags of flour via FedEx wasn't exactly cheap. Total cost was around $75 for 50lbs shipped to Mukilteo, WA from California.

So you can see why Shepherd's Grain high gluten was attractive to me. It wasn't 00, but I had the aforementioned flours to use in my various WFO or other high temp ovens. Plus the SG high gluten would brown way better than the 00 flours in my home ovens.

So pricy inconsistent flour for the high temp ovens, and then Shepherd's Grain high gluten for NY style in the home oven and making bread.

And then one day, after doing some reading on the pizza scene in Tokyo and being a bit inspired by what was going on there, I decided I was going to see if I could do some really high hydration pizzas (around 70%). Since the 00 flour was expensive and this whole idea was likely to fail, I figured I would use the Shepherd's Grain HG flour. Sure, it might burn because it's not 00, but let's see what'll happen in my Roccbox anyway.

What happened is that I made some damn amazing pizzas.

I was blown away. The Shepherd's Grain wasn't "00", how the heck did it just survive 900° temperatures and come out of the oven amazing?

And so after that, I never ordered another bag of 00 flour, used up what I had, and it's been Shepherd's Grain High Gluten for my pizza making since then.

I guess, until a couple of weeks ago.

And now we finally get to the new flour.

Shepherd's Grain new Napoletana 00 is like the High Gluten, but turned up a couple of notches.

The texture of the two flours are a little different, the 00 is softer and has less ash in it. The 00 is also finer (hence the 00 designation) which I presume comes from the new partnership Shepherd's Grain has with Grain Craft, which is milling the flour now.

But as far as working with the dough, it's pretty much the same. The 00 took the same hydration that I'd usually use with the high gluten flour, and shaping and putting toppings on the pizzas was the same. I could shape my pizzas without any problem after a 16 hour rise for the first batch (I was impatient!), 24 hours on another bake, and then even a week later after sitting in the fridge. I was expecting the 8 day old dough to be a bit weaker after being in the fridge for 7 days, but it felt just like it had the week before.

How does it taste though? As good as the best pizzas I’ve made. Soft on the outside for the Neapolitan style bakes in the Roccbox, and perfect texture for NY style with the home oven. It's a 00 flour that cooks correctly in a home oven! How amazing is that?

Since I'm using my sourdough starter, the taste was a little bit different (and better) the longer the raise, but it was always good. Madeline gave it two thumbs up (which she doesn't always. She's more picky about pizza than me).

OK, time for pictures, and some more words after that. 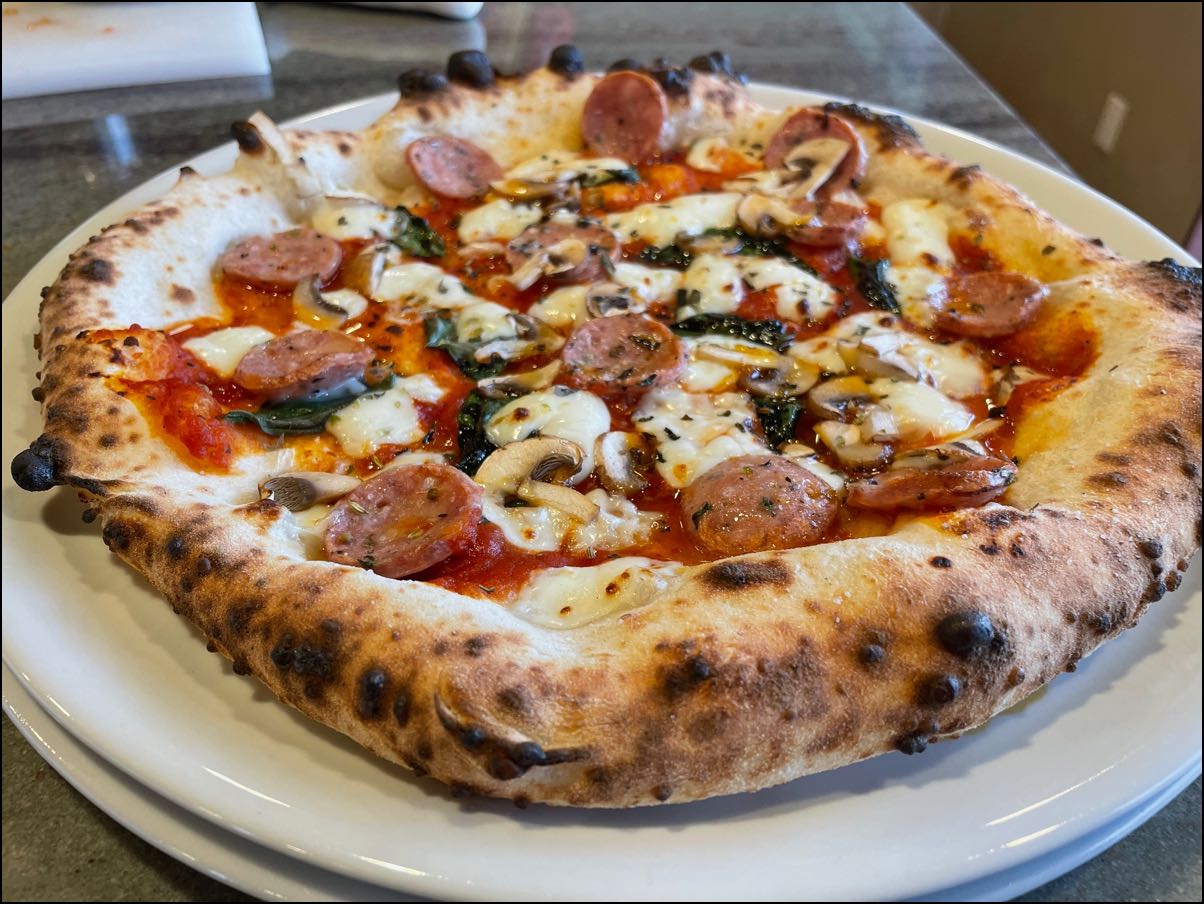 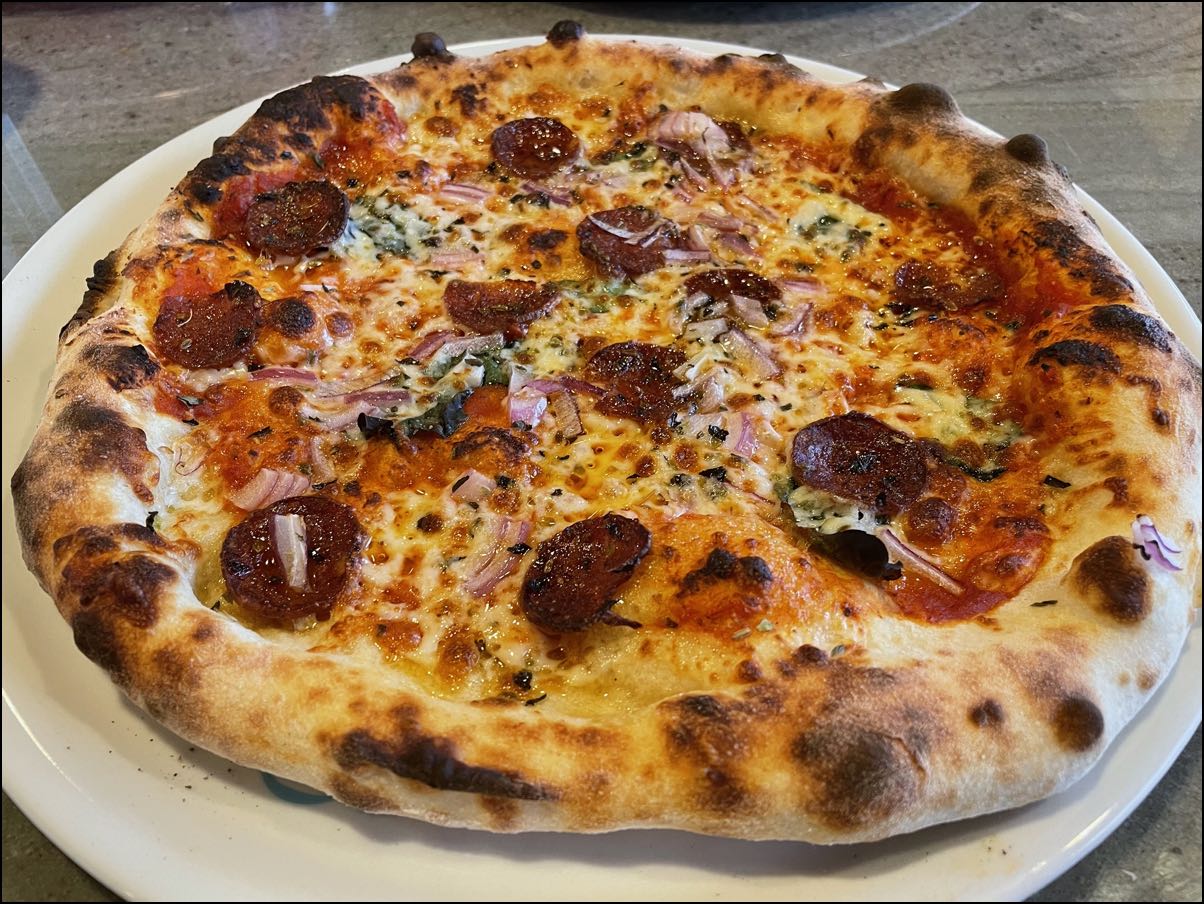 Cooking in the Roccbox with gas and cherry wood behind the burner. ~1.5-2m. 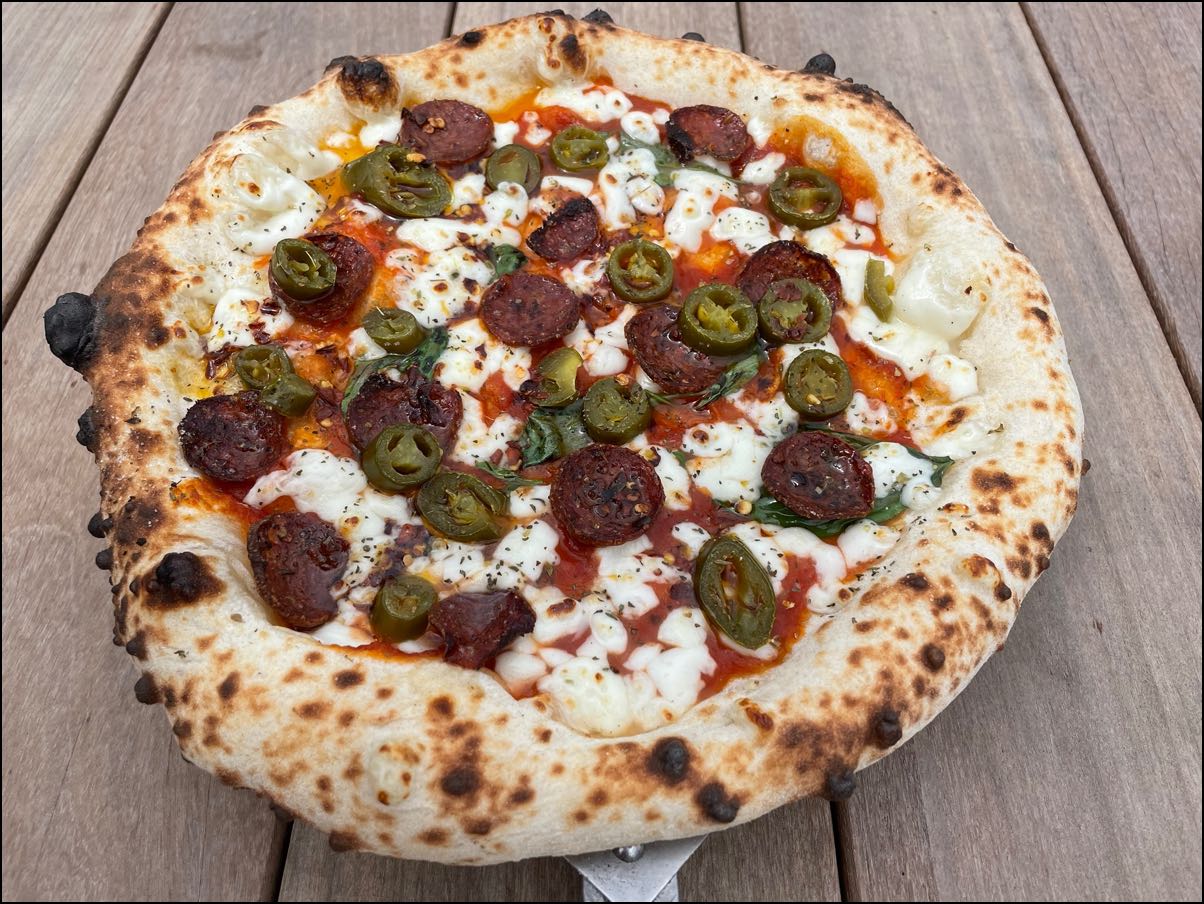 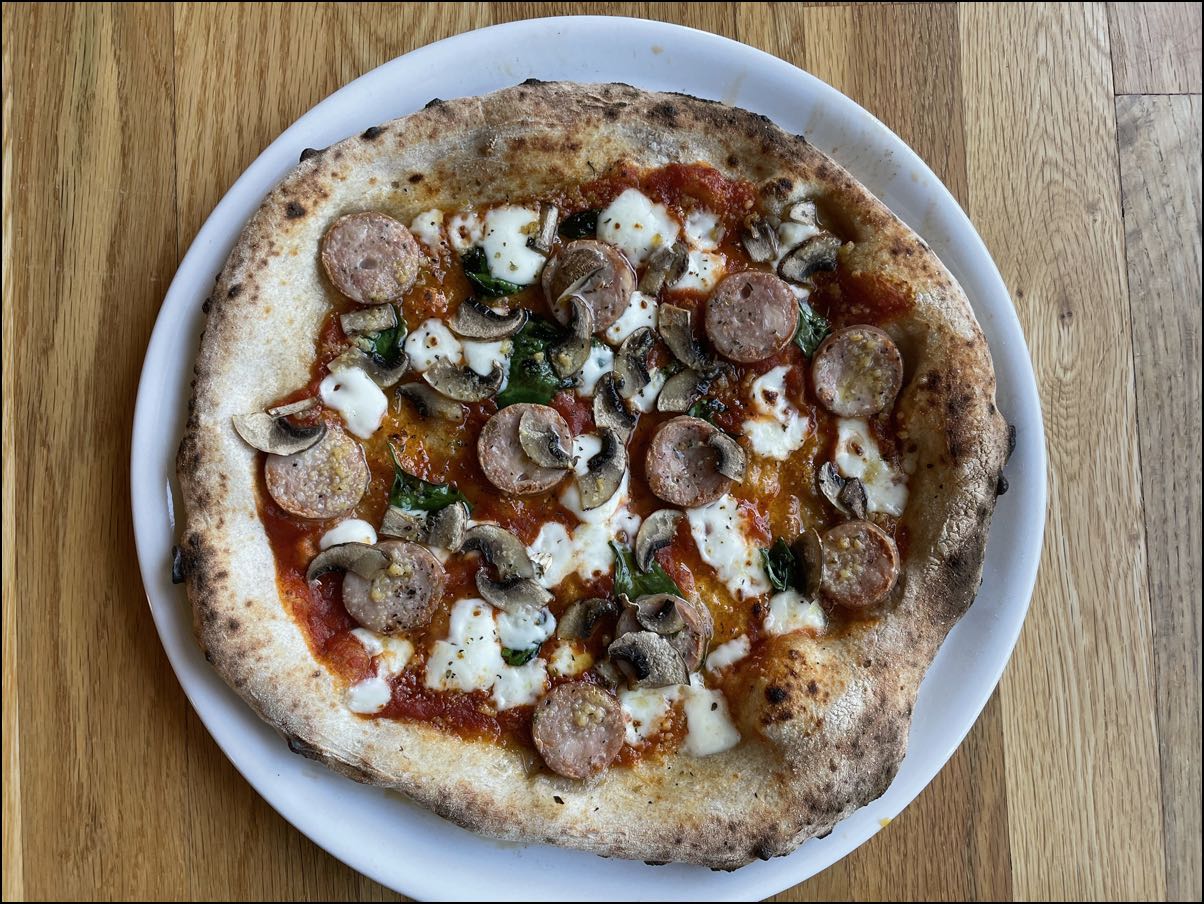 Technically, how does it compare to Caputo, or other 00 flours?

On paper, the flours are pretty much the same. The ash and protein numbers are almost identical (0.46% and 12.3% respectively). But if you're living in the Pacific Northwest you're probably going to want to use SG's Napoletana 00 since it is local, and that means it's going to be way fresher. And fresh flour makes for better bakes. And it's cheaper!

Is it just for pizza?

No! When I bought the SG 00 I also picked up 50lbs of SG Whole Wheat. I made bread with it, and it was also awesome. 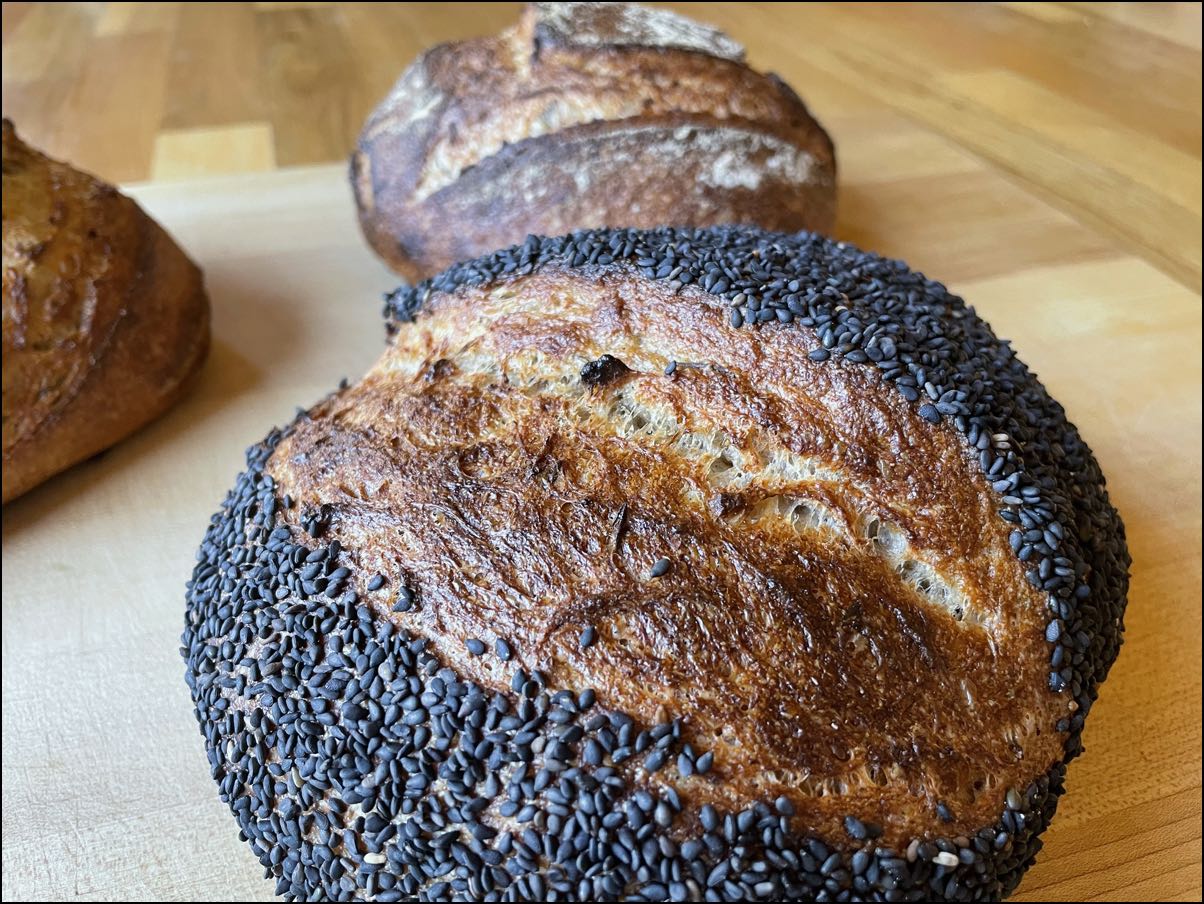 A couple of loaves mixing 00 with whole wheat.

How do I get some?

This is the tricky part. It’s brand new, but I was able to buy some because I live close to a marketing person from Shepherd's Grain. Merlino Foods in Seattle is probably carrying it, but with Covid I think things are a bit shut down for them right now (but maybe not in the future!). If you call up your local restraunt supply store and start asking for it, maybe they’ll start carrying it? I will certainly update this post with availablity once I find out more.