So I Got a New Bag of Flour

For the past six months or so, Shepherd's Grain High Gluten flour has been my go to for making pizzas and bread. Even though it's malted (ie- has a bit of barley in it which will make it brown faster) it performs very well in my Roccbox. And it's 1/3 the cost of getting a bag of high gluten 00 from Central Milling shipped to me, so it's easier to justify using it more. (I still use the CM00 to feed my starter however).

The SG flour has been great. And recently it seems to perform way better than previous purchases (I've been using it off and on for a number of years, mostly for bread making and NY style pizzas). I just attributed this to the amazing grains that the state of Washington has been putting out recently.

My most recent purchase was getting low so I picked up a new 50 lb. bag and made some pizza dough with it.

Using the exact same formula from a week ago (with 10% whole wheat), the dough came super sticky after 7 minutes in the mixer.

Well crap. Maybe I messed up? I'm pretty sure I didn't. That's OK, it's a new bag and I'll just roll with it and see what happens. Next is the autolyse phase, then a knead and bulk raise, and I'll use it the next day like normal.

So that's what I did, and it still felt a bit funky and sticky the next day when I broke it up into individual balls. Hrm.

And when cooked, the first pizza came out with same raw dough in the crust which is super gross when you bite into it.

Well crap. The last time this happened was a number of years ago, and with the exact same flour. Could it be that the previous bag was just an anomaly? Some magical bag of flour that I'll never again experience?

So two days ago I made a new batch of dough with 100% SG high gluten and let the mixer go for about 10 minutes. It came out a bit sticky again where the previous bag wasn't.

Fine, I'll fold it a couple of times before a 40 minute autolyse, and then fold and knead it again after that.

This actually helped improve the texture of the dough quite a bit, so I waited another 40-60 minutes before folding it more, then put it back in a container till later that night (about 10 hrs later), at which point I split it up in to individual balls as the plan was to cook a pie for lunch the next day.

When I opened up the proofing container the next day the dough was pretty flat and looked generally under-proofed. This happens sometimes, and isn't usually a worry- but in this case the dough was super sticky again and hard to get out of the container. The pizza made from it was fine though. Nothing amazing, but not bad.

I had three more dough balls to use, but I wanted to see how they would behave after another 24 hours. So I re-balled the dough (and they felt pretty good- usually the gluten starts to give out at this point and it's harder to keep the dough together) and stuck them in a proofing container. But instead of keeping it in the kitchen where things have been a little warmer (hello summer) I put it on the floor of my garage, where it's generally cooler.

Then today I checked on the dough expecting to to be collapsed and holy crap would you look at this: 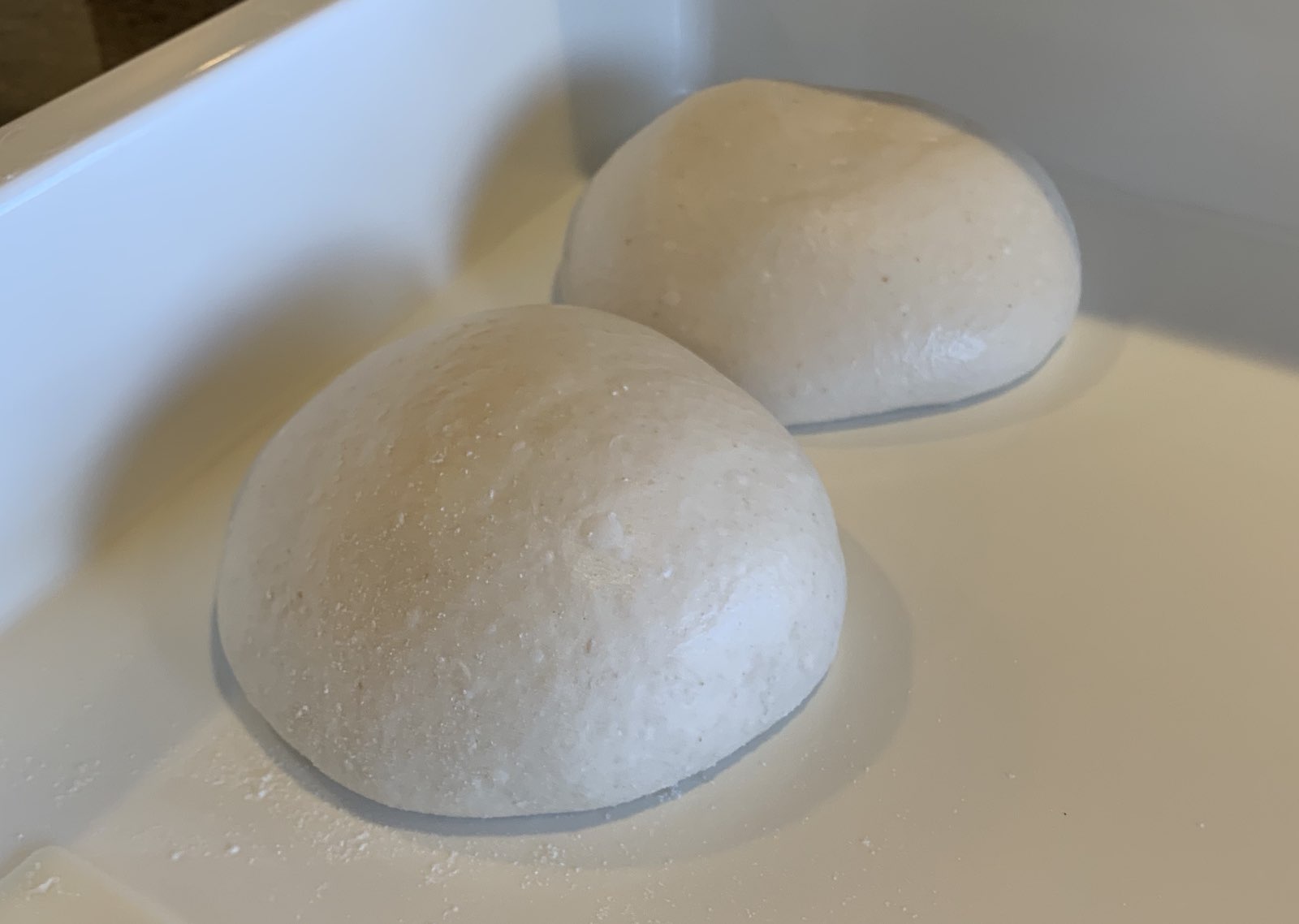 It's not the greatest picture, but it's a perfectly raised dough ball that was twice as tall as the previous day. And it felt great. And the pizza it made… oh my. 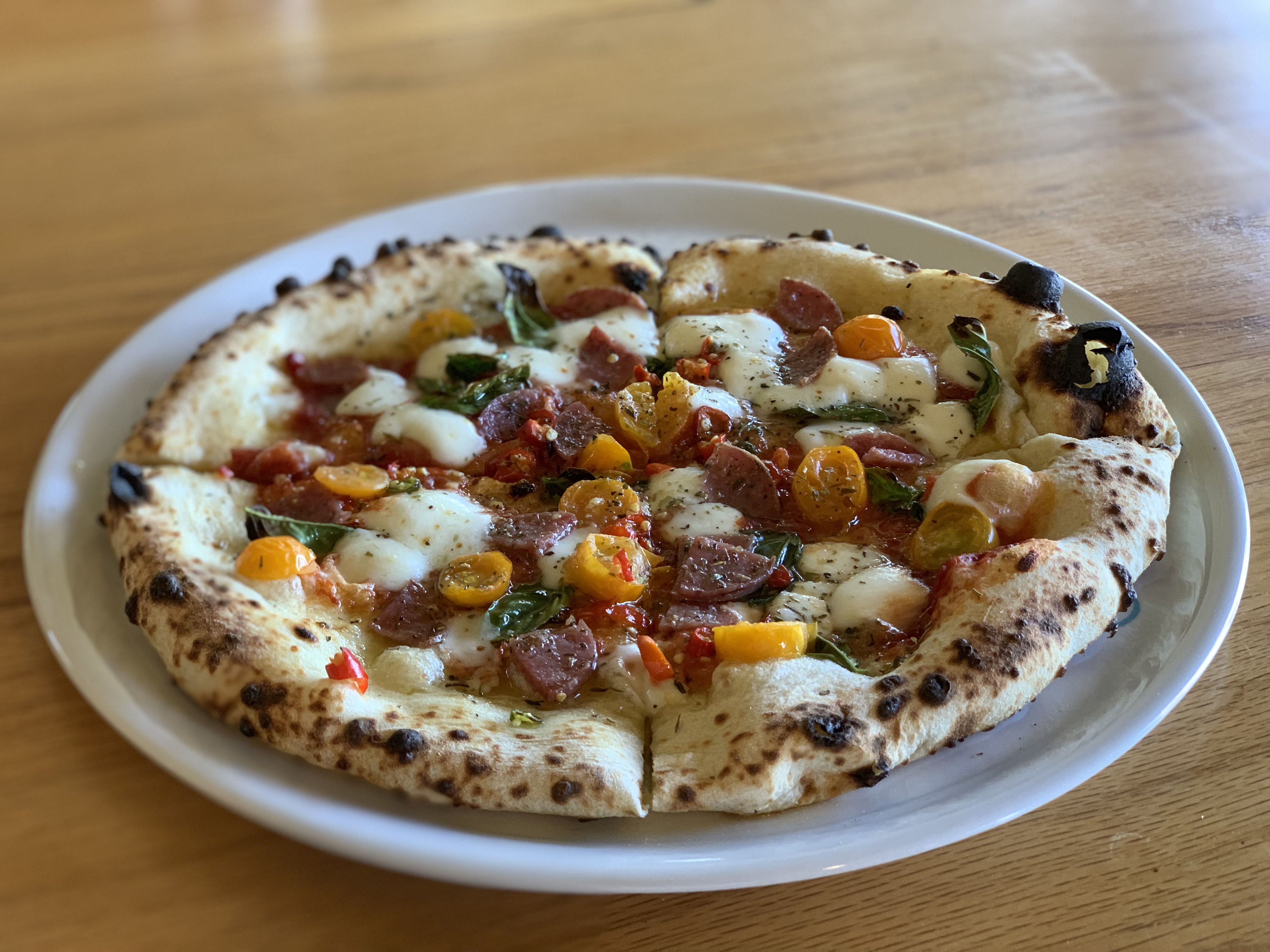 Is there a moral here? No, but maybe a lesson. Different bags of the same flour can be different. What causes this? I don't know, but my educated guess is that the time of year in which the wheat was cut and milled makes a difference. I don't remember exactly when I bought the previous bag, but I think it was this past winter sometime.

So for this current bag of flour, a longer proof with more folding is necessary for the best pizza.

I'm going to start cataloging the bags of flour, when they were bought, and which grower they came from (which you can do with Shepherd's Grain! The new bag was from either David & Margaret Dobbins or Blake & Kasey Wolf). I'm also going to buy another bag in about 3 months to see what that's like.

I still have some of the dough from the previous bag, which I want to use for a little science experiment. Maybe I'll make two batches from the same formula and see what happens.

Update from the morning: The dough raised more, and seemed to be in good form, but it's gluten structure was shot. So while a pizza could have been made from it, it would have been pretty hard to do.