Yesterday I rented a tile cutter and got to work on another idea I had for the KP (KettlePizza), and that was lining the sides with cuts of quarry tile:

Once again, the idea is to retain as much heat as possible in this guy.

So how did it work?

Meh. I didn't use as much coal as I have previously and I didn't spread it out below the cooking tile as much as last time either. So while the KP got up to about 850° it still didn't cook the pizza in quite the way I wanted it to. I think there was just too much heat in the back and it wasn't distributed around enough. That, and the door to slide the pizza in might be a little too big.

Next time I think I'll make the bottom layer of tiles a little bit more inset than what you see in the pic above. Hopefully there will be more room for the heat from the coals to come up and cook the pizza in the front and sides.

I also added some oak chunks to the fire which helped push the temperatures up quite a bit. It also made the flavor of the crust a bit too smokey for my tastes. Maybe I should have let it burn a little more before I put the pizza in.

I also tried some different flour this time (Bob's Red Mill unbleached white) and while it was great fun for tossing in the air while shaping, the flavor sucked (I even gave it a 6 hour raise). I'm wondering if I didn't add enough yeast to it. I usually use quite a bit less than most recipes will suggest, and its always worked well for me. Maybe that's a bad idea with this flour. 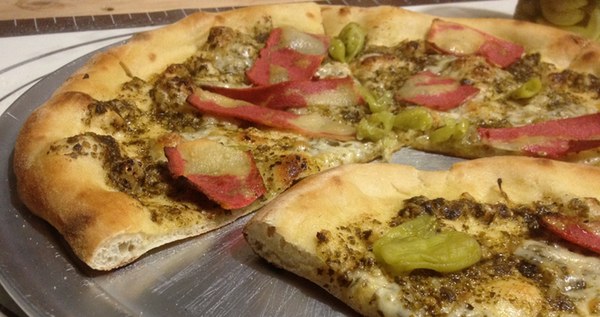